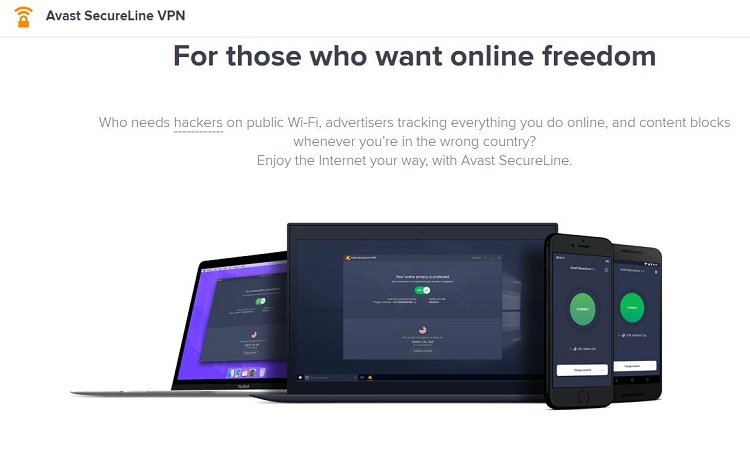 What is Avast SecureLine?

Our Avast VPN Review ( What the company calls SecureLine ) is taking a close look at this privacy protection service offered by the Prague-headquartered cybersecurity company. Although more well known for its antivirus and Internet security products, Avast has been branching out and launched its SecureLine VPN service in 2014.

This makes it kind of the middle child between industry veterans like ExpressVPN which was launched in 2009 and newbies like Surfshark which was just introduced in late 2018. Unfortunately, despite the popularity and apparent excellence of its antivirus products, Avast seems like it may have bitten off more than it should with a VPN.

Still, there are some uses for this unusual choice in a VPN service provider. Let’s take a run though with Avast SecureLine VPN in this review and see where we end up.

Company Based in Prague

Generally, it is always a good sign when a provider of anonymity services isn’t based in a country with oppressive regulations or strong data retention laws. These include the 5 eyes, 9 eyes, and 14 eyes countries like the US and France.

Although the Czech Republic isn’t part of these alliances, it still does remain in the European Union which places it in an area less favourable for privacy. The bright spark is that the Czech Republic still hasn’t implemented any mandatory data retention laws yet – so no logging!

By default, Avast SecureLine VPN only offers one mode of connection protocol; OpenVPN. At the same time, it also fully encrypts data at 256-bits. This combination makes it extremely secure at this point of time but doesn’t give users a lot of leeway in terms of choice.

Still, coming from a company that specializes in antivirus products this paranoia isn’t surprising. The problem is that VPNs can be put to various uses, some of which have no need of such high encryption. For example, streaming media from Netflix could benefit from lower encryption rates if it boosts speed – but more on that later.

For a cybersecurity (and now) privacy company to be found harvesting data is already a grievous sin, but Avast was recently caught trying to sell that data as well. Compounding on two wrongs, the company even tried to justify the sale of said data.

Apparently, the disassociation of data from identities wasn't as clean as Avast thought and ultimately it was possible to clean up and piece together the information – linking back to identities.

For a product that has been in the market for around 5 years, Avast Secureline VPN is surprisingly sparse. It comes as both an add-on to their Internet security suite of products as well as a standalone product.

This means that if you’re getting it as a standalone, it doesn’t come with many of the bells and whistles that most other VPN service providers are offering today. For example, may include features like ad blockers, whitelisters, and more. What Avast is offering is very simple and pure.

Since there is rarely any need for VPNs service with trusted networks, SecureLine gives you the option to trust certain networks in its settings. This means that you can set it to trust networks where you feel safe such as within your home or on your business network.

I would have been very surprised if Avast had left this out but thankfully, they did include a Kill Switch. When enabled, this option will cut off your Internet access the moment it detects the loss of connection to a secure VPN server.

The idea here is to make sure that none of your data is leaked, even while encrypted, if you are somehow cut off from the service provider. This feature is standard on almost all VPN service providers today.

You can also choose to add browser extension on to either FireFox or Chrome from within the Windows app. Although handy, I can’t foresee much use of having this here and it seems simply redundant having already installed the full application.

Unfortunately, Avast doesn’t disclose how many servers it operates, just that it has them in 55 locations in 34 countries. Strangely, I have seen some VPN reviewers claim that this shows they operate 55 servers only – how they arrived at this conclusion I have no idea, since 55 locations merely means that Avast has servers operating out of more than one location in a country.

For example, if it has servers located in Honolulu and Atlanta, this would mean it has an unknown number of servers in 2 locations in 1 country.

Still, I’ve noted the spread of countries that Avast has servers operating out of and they cover a very good geographic spread. No matter where your location is, it is likely that you will be able to connect to one of their servers nearby your location at least.

Support for Avast SecureLine VPN is a little limited in the sense that they only have apps for mainstream platforms. This includes PCs, Macs, Android and iOS-based devices. They also have browser extensions, but those don’t really count.

There is some talk of support for Android boxes, but that goes back to the general Android platform support. There doesn’t seem to be a possibility of it working on other devices such as TVs, routers, or even gaming platforms.

How Fast is Avast VPN in Reviews?

In our speed tests I always do a benchmark speed just before we run our VPN speed tests. This is to give readers an idea of how fast our baseline speed is at the same time period for more accurate benchmarking.

The advertised line speed at my location (Malaysia) is 500Mbps up and down. Because I’m connecting over WiFi, I am seldom able to get that full speed, hence the baseline speed test.

The baseline speed test was where I got my first indication of the problems to be seen with SecureLine VPN speed. With the VPN service on and connected to a server in my home country, speeds were bad. This usually indicates that the service provider has poor servers in some locations.

Speed test with a US server was appalling, giving me a result that was eye watering to see and not experienced since the days of dialup modems. No only was the latency higher than usual, but the speed wasn't nearly enough for browsing, not to say file downloads or streaming of any kind.

Speeds improved slightly when connecting to a server in London. While this does improve the usability potential, it still remains far below acceptable when comparing it to a top-grade VPN service provider.

When it came to Africa, speeds with SecureLine dropped again. Although the results were once more painful to watch, it is seldom that many service providers pay attention to this region. Only a handful of providers have managed to offer decent speeds out of Africa, for some reason.

Singapore is my favorite place for VPN connections simply because of the high speeds in this location. This is usually a combined result of excellent infrastructure, close proximity to my physical location, and high quality of servers generally located here.

This was the one location that SecureLine was shining, even though in comparison with others it fell flat yet again.

Speeds to an Australia-based SecureLine VPN server were decent and definitely usable. One part of this is likely to be, again, proximity. No matter the reason, the Australiasia region seems strong in terms of speed for SecureLine.

Overall, I was quite disappointed by the general speeds offered by SecureLine VPN. While it is true that I wasn’t expecting much of this brand in VPN since after all it isn’t their core product, I at least expected a bit more.

Certain servers offered such slow speeds that they were practically unusable. In fact, even some free VPNs I’ve tested were able to offer much better speeds, not even comparing them with top-of-the-line providers like ExpressVPN, NordVPN, or Surfshark.

Avast SecureLine VPN is a service that need to seriously look at upping its performance if it ever expects to be a strong name in this business.

When it comes to video streaming and P2P, I am in a bit of a bind as what to say. Speeds from my location to key servers supporting streaming and P2P are appalling, leading to generally poor performance. For users who are closer by these locations, you MAY have better luck.

However, it has been my experience that generally, paying for a service and hoping for the best seldom turns out well. Video streaming for Netflix US content, while it worked, was highly pixelated for me. For P2P with the service active, speeds dropped down to almost nothingness.

As you can see in the image above, where the ‘A” is marked was where I started downloading a number of torrents without a VPN on. Speeds continued to climb well until I turned on SecureLine – and then fell flat (see ‘B').

There is also the issue of the very limited number of locations that support both streaming and P2P. If you were based near the US or EU region it might be better, but Asia-based VPN users should steer clear of SecureLine.

License and Pricing: Is Avast VPN Worth It?

Before you buy Avast SecureLine VPN, grab a hold of their app and run it for seven days as a free trial. If you think it works for you then you can consider buying a license. Licensing is available either monthly or annually (which gives a discounted rate).

Pricing depends on what device you want to run it on. You can buy the full suite that supports 5 devices of various types, or you can download single-device versions at different prices. The full suite costs $79.99 per year, while desktop platforms cost $59.99 per year for each device. Mobile device services cost $19.99 per year.

Personally, I feel that for the level of service and features offered by Avast SecureLine VPN, you can opt for a much better service provider that would not cost much more. My Surfshark scubcription is light years better than SecureLine and I only paid $1.99 per month for a two-year subscription (works out to less than $50 – for two years!).

Important Notice: Avast SecureLine is complicated to unsubscribe from. Managing your subscription is separate out of your normal Avast account. Exactly how to unsubscribe depends on what payments processor was used during your sign up. Visit their unsubscribe page for details. If you do not unsubscribe, your credit card will continue to be auto debited each cycle!

Conclusion: Do I Want or Need Avast SecureLine VPN?

On my conscience, despite Avast being a reputable service provider I can’t really recommend their VPN service. SecureLine seems to be merely an afterthought with Avast and it has obviously not put in any real investment in effort or funds to develop this product.

*Edit – Since the news came in on Avast's selling of user data, I feel bad even mentioning their reputation in this article. The privacy business is built heavily upon trust and Avast has egregiously violated that principle.

There are many more much better choices in the VPN service provider market – that are faster, cheaper, and have more features. The VPN market is extremely competitive, and for a half-baked product like this to try and cut its way in at these prices is simply unconscionable.

Consider instead these other VPNs which I highly recommend;

Visit Site
Avast SecureLine VPN Review
3.3 / 5 ...
Pros
Cons
Summary
Avast may be a huge name in the antivirus scene but as a VPN service provider it still has a long way to go. Sadly, given its time already in market any improvements don't seem very likely.
Performance
Security
Features
Useability
Pricing