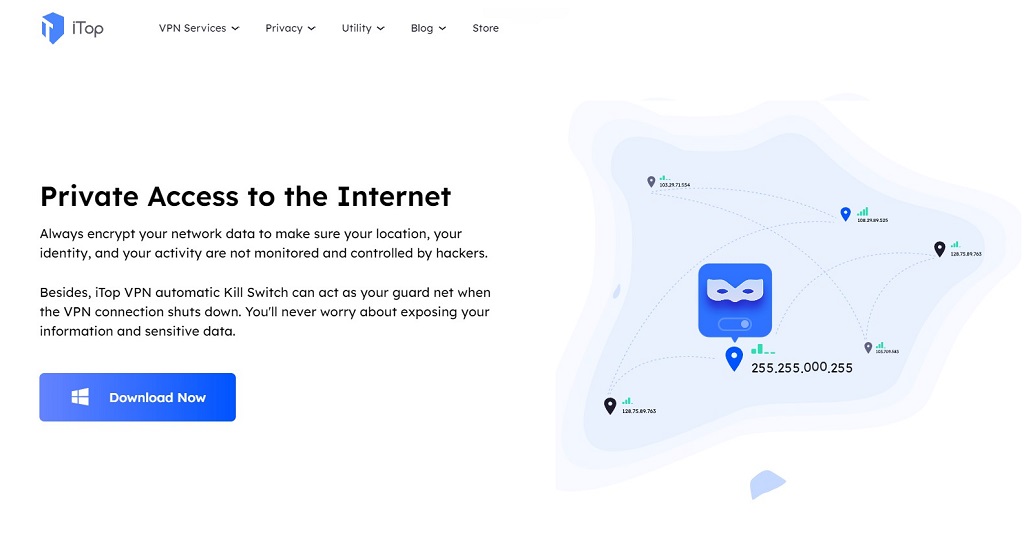 The iTop VPN review published today is one I've wanted to do for a long time. iTop VPN is widely known for its free VPN service and ease of use. Essentially, those new to VPNs would want to start with something as easy as iTop VPN.

If you’ve stumbled upon iTop VPN while scouting through the endless list of VPNs, you might wonder if it’s right for you. I have tried a handful of VPNs, so I’ll be sharing my fair share of experience with iTop VPN today.

One of the things I love is that everything is just within one click. There are no complicated procedures or steps. Most of them are straightforward. If you want to switch servers, just click “Connect,” and you’re good to go.

2. Able to connect anywhere in the world

iTop VPN has more than 1800 servers in many countries worldwide. You may connect to specific regions to access the content only available in that region. For instance, Netflix is pretty popular, and there is certain content restricted to specific locations in the world. With iTop VPN, you won’t face any problems accessing them.

Their servers are also neatly grouped by function on the left navigation menu. For example, you can directly connect to servers for gaming, streaming, downloading, etc. If you can’t find the particular server you’re looking for, simply select the ‘All Servers’ tab to view the complete list of available servers.

Most of the websites I’ve visited while using Europe servers load smoothly without much delay. Of course, I connected with the UDP protocol, also known as the fastest connection, so if you were to use another protocol, it might not be as fast.

iTop VPN also comes with split tunneling and uses encrypted VPN connections to distribute some app traffic. This feature prevents slowdowns in your connection speed. Bear in mind this feature is only available for paid plans.

4. iTop VPN is Secure and Private

Security features on iTop VPN that I’d like to highlight would be the built-in ad blocker, no logs policy, and kill switch.

The built-in ad blocker helps to make your browsing and streaming experience smoother and more enjoyable. However, this feature is only available for paid plans. As for the no-logs policy, iTop VPN won’t keep any information about your profile alongside the IP address and websites you’ve visited.

The kill switch helps to switch off your internet connection whenever your VPN connection gets interrupted. This ensures your device gets protected immediately, which is a plus. However, you’ll have to switch it on manually.

Another security feature to highlight is browser privacy which ensures anonymity by clearing your tracks on Opera, Chrome, Edge, Firefox, and Internet Explorer.

5. Able to connect up to 5 devices simultaneously

With the same license, you can use the VPN service for up to 5 devices simultaneously. iTop VPN is also compatible with most devices and operating systems such as Android, iOS, and Windows.

Cons: What I Dislike About iTop VPN

iTop VPN seems to shy away from some VPN protocols. It’s not surprising since there are many available today. Yet omitting some like IKEv2 seems to be an odd choice. IKEv2 is still popular among VPN users on mobile platforms.

2. Adblocker is only for paid plans

iTop VPN users on the free plan will face a lot of ads online. The built-in ad blocker is only available for paid users. This shortcoming is quite annoying since it’s not a very advanced feature. There are even multiple free adblockers for browsers like Chrome – just not for free on iTop VPN.

iTop VPN is one of several VPN services with a free plan alongside paid plans. Below is a brief overview of the key features each plan offers:

ExpressVPN offers more servers, up to 3,000+ worldwide (around 160 locations over 94 countries) compared to iTop VPN, which only provides access to 1,800+ servers. However,

Both offer a money-back guarantee, but iTop VPN only offers up to 15 days, whereas ExpressVPN allows you to try it out for 30 days.

As for customer support, ExpressVPN has a live chat available 24/7, unlike iTop VPN. However, they offer in-depth FAQs and support through email by submitting a ticket. Another similar feature both of these VPN service providers offer would be the ability to connect up to 5 devices simultaneously.

Check out our ExpressVPN Review

Surfshark covers most regions with up to 3,200 servers (more than 100 locations within 65+ countries), more than the iTop VPN. Besides that, Surfshark doesn’t offer any limitations as to how many devices you can connect simultaneously, unlike iTop VPN, which limits only up to 5 devices.

In terms of security and privacy, Surfshark offers strong encryption (AES-256 bit) and secure protocols such as OpenVPN and WireGuard, which iTop VPN doesn’t offer.

Both VPN services offer a kill switch and a no-logs policy, ensuring your data is secure and protected. The other similar feature worth mentioning is the ads blocker so you can have a smoother browsing experience.

You might find the user interface of Surfshark a little complicated as they offer a more comprehensive range of features than the simple left-side menu bar on iTop VPN. Surfshark has various buttons, tabs, and sidebars.

The customer service offered by Surfshark includes a live chat and email where you’ll have to submit a ticket. They are pretty well-known for promptly replying to your inquiries too.

Check out our Surfshark Review

NordVPN allows users to connect up to 6 devices simultaneously, just one device extra than the iTop VPN. Besides that, NordVPN has more than 5,600 servers worldwide, which is more than most competitors.

NordVPN is known for great security features in the VPN world. One security feature that stands out is multi-factor authentication, where you’ll need to enter your password on the website before using the app.

In addition to that, since NordVPN manages its own servers, no one else can access them. They also offer Double VPN (or multihop), which provides extra security by routing your traffic through two different servers. There are two kill switches compared to iTop VPN, which only has one.

The usability of NordVPN isn’t as easy as iTop VPN, though. For instance, iTop VPN allows you to perform any function with just one click. Certain functions on NordVPN may require more than one click, requiring extra effort.

The customer support is decent as well. There is a live chat where you can contact them for any inquiries.

Check out our NordVPN Review

Now that you’ve gone through my experience, you’re probably wondering whether it’s worth the try or not. Well, to simply put, iTop VPN makes a great choice if you’re under a budget since it’s one of the few VPNs that offers a free plan with decent speeds. Though the free plan comes with limited bandwidth, it should be no problem for your streaming or browsing activities.

iTop VPN is great if you’re a beginner and don’t want to go through complicated features or functions. Since most of the functions only require one click, it’ll be easy for you to understand how it works.

However, the security and privacy of the iTop VPN aren’t as top-notch as the other competitors. So if that’s your major concern, you might want to pass on this.

Plus, when you need help, there’s no live chat that can respond to you immediately. Hence, if you prefer to settle your inquiries ASAP, iTop VPN would probably make you wait as you need to wait for them to reply to your email.

iTop VPN Review
4.1 / 5 ...
Visit Site
Pros
Cons
Summary
iTop is somewhat of a mixed bag of tricks. While it's excellent the free plan is there, it's way too limited for a proper assessment of the service.
Performance
Security
Features
Useability
Pricing