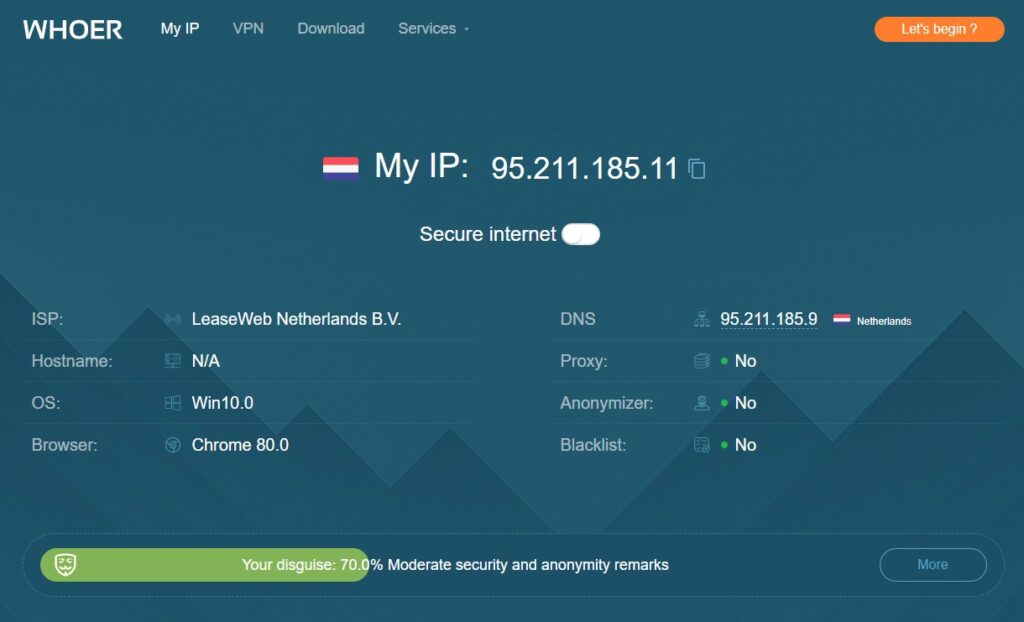 Whoer VPN is a service offered by a Cyprus-based company called WHOIX. Aside from the VPN service, WHOIX also offers a few web-based tools which mainly offer simple services that you can find many other places.

To be honest, this VPN first caught my attention as it seemed relatively unknown and yet still managed to command quite a respectable search presence. Being the curious sort, I dug deeper trying to find what was special about Whoer.

This review is based on the free trial that is available of Whoer VPN, a courtesy they offer users who might be interested in signing up. The trial is highly limited but is important for reasons I’ll discuss later. In any case, from sign-up onwards, the more I explored Whoer the more concerned I become.

When it comes to applications that are meant to be for privacy or security, having the installation file itself get flagged by an antivirus program is already worrying. In my case, when trying to run the installer, Norton threw up a warning. This caused me to blink but nevertheless I proceeded with the installation on my test system.

No information on Encryption

256-bit encryption is the de facto standard of the day, with a few VPN service providers allowing an option of 128-bit for those who wish to sacrifice a bit of security for greater speeds. In Whoer’s case – the don’t talk about it at all.

One of the bright spots in Whoer is that from their website and Windows app option, this is a company that feels the need to openly address something that most VPNs take in their stride. That is the fact that many websites, especially streaming services, dislike VPN connections and try to block them.

In many cases, VPNs handle this behind the scenes and do their best to work around VPN blocks. In the case of Whoer, you get the choice of tweaking a few settings to further mask your device for greater anonymity. It allows you to try and mask the VPN connection as being from either a PC or mobile device.

Honestly, I can see some slight advantage in this, but the feeling is that it’s more of them trying to create a selling point where there really isn’t one.

My review of this VPN was based only on the Windows app. Normally I’d test the full range of services that are offered, but I was troubled enough by them to end things after an analysis of performance on Windows, which is my main platform.

Although they don’t directly state what connection protocols they use, there is an option in the app settings to “Use UDP”, which indicates the use of OpenVPN. This is the only protocol that allows users to opt for either a TCP or UDP type connection.

The kill switch is something that comes as standard on most VPNs and if it were missing, that would be surprising. In Whoer, do note that the Kill Switch is disabled by default, so you will want to go to settings to enable it before use.

Kill switches on VPN apps help monitor your connection for any drops, and if those occur, will block all data from going in or out of your system. This help to prevent any identifying information form getting out of your PC.

Given how spartan Whoer is and how few resources it has in terms of servers, it was quite surprising that they offer double VPN. If selected, this means that your connection is routed through two different VPN servers for added protection.

Again, the user experience I describe with Whoer Is based only on their Windows application. Trying to install the file (it’s even downloaded as an executable) got me a warning form my antivirus as mentioned earlier. Aside from that though, the installation process was smooth and surprisingly quick.

The Whoer installer is only 30-odd MB in size and the app feels very lightweight and minimalist. Even in the settings options, there isn't very much that you can tweak and it works out of the box, so to speak.

It is likely that unless you are having problems using Whoer, you won't have to touch any of these settings except perhaps to enable startup with Windows and the Kill Switch. Even if you are having connection problems there isn't much you can do.

You can use Whoer with a wide range of platforms ranging from mainstream operating systems to even browser plugins. This makes it very versatile and for those who are seeking some very rudimentary browser-based protection, an ace.

Whoer Has a Strange Mix of Payments Processors

When it comes to making payment for Whoer – this is the part that stopped me from reviewing the full version. The price didn't matter since I pay for many of the VPNs I test, but it was the payment methods Whoer offers that worried me.

For a company that is supposedly based in Cyprus, Whoer has a strange mix of payments processors from around Europe. While this might be normal for a regional service provider to have, it is also usual to offer standard global payments processors like Visa (international) or even PayPal.

Given that I couldn't use any of these processors, I eventually gave up on reviewing the full version of Whoer.

This test was carried out on the trial version (I'll explain why later) and the only server available is in the Netherlands. Even that is restricted to a speed cap of 1 Mbps, which is pretty much useless for anything nowadays.

Still, I got pretty much the speed advertised by them for this server and my result at SpeedTest shows that. I'm not too optimistic about the speeds on their full version to be honest, since Whoer only has a handful of servers (in 16 countries).

One of the top aims I have (personally) for a VPN is that it must be able to help me overcome geo-blocks from media streaming sites and support P2P. After all, these are two key reasons for using them.

Whoer claims to be able to unblock Netflix and a host of other streaming services as well as support P2P. Yet from what I saw of the quality of service, it is highly unlikely that they will be effective at doing either.

If you're planning on using the free trial for this, you can forget it with a bandwidth cap of 1Mbps.

Here comes the real shocker. Who offers three payment plans – either one month, six months, or a year in duration. The maximum savings is on their annual plan which brings the price down to $3.90/mo.

If you've reached this point by now you must be as stunned as me. That's more than what many top-notch VPN service providers offer and heads above some of the lesser brands.

Comparing that the capabilities of these service providers are much better than Whoer, I am wondering how it justifies gouging customers to this extent.

That being said, whoer offers a free trial for anyone who wants to use it – for an extended period of time. Essentially, this slips into ‘free VPN' territory although they don't say so. The model does differ a bit though since most free VPNs will also cap your data transfer allowance – but not Whoer.

Warning: If you decide you still want to go ahead and buy the full version of Whoer, be advised that they have a no-refunds policy.

I realize that because of my evaluation of Whoer on the trial version, much remains unknown in terms of actual performance. However, I would suggest that the overall user experience serve as a guide of what to expect, even on paid plans.

Further, the limited number of countries Whoer has servers in makes it quite unlikely that they can seriously live up to their promise of unlocking so many streaming services or even support P2P activities.

It is best to approach this VPN with caution and take their claims with a huge pinch of salt. If you still think it's worth a try, visit their site at www.whoer.net

Whoer VPN Review Summary
2.2 / 5 ...
Pros
Cons
Summary
Whoer is a real mixed bag of tricks but given its reviewed capabilities, this VPN is more bark than bite. It is doubtful that it can really deliver on all promises.
Performance
Security
Features
Useability
Pricing

Instead, we highly recommend;