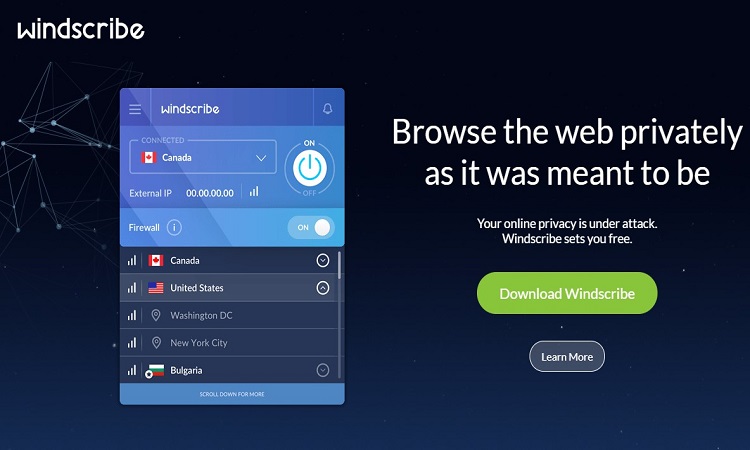 Our Windscribe review places it firmly on our Best Free VPN list. These are VPNs that have free plans which are usually limited in some way but still usable. In this case, there is a limitation on what servers you can use and a monthly bandwidth restriction as well.

This review covers the free version of Windscribe, which offers access to more limited server locations and no Netflix access. There is also Windscribe PRO available with those features starting from as little as $5.75/mo

Is Windscribe Safe to Use?

Yes, Windscribe is quite safe to use. Although there is strong air skepticism about many free VPN service providers, we do recognize that paying for a VPN service may be out of reach for some. Windscribe has been around for a while now and it is still going strong.

Security-wise, it follows many of the encryption standards that have become the norm in this day and age for many service providers. Encryption is accomplished using the AES-256 cipher with SHA512 authentication and a 4096-bit RSA key. This combination is as safe as can be for a consumer environment today.

Likewise, there is a decent spread of connection protocols including the usual suspects like OpenVPN (both TCP and UDP), IKEv2, and Stealth. One addition to the group is what Windscribe calls ‘WStunnel'.

Note: WStunnel is similar in concept to the Stealth protocol which encloses an OpenVPN connection in a TLS tunnel. Instead, WStunnel does it in a WebSocket. The exact details are rather technical in nature, but in a nutshell, WebSockets help establish TCP connections for non-http traffic.

Windscribe Does Store Some Logs

Although we carried out extensive network monitoring and could detect no leaks or other anomalies, we are a little concerned about the documentation Windscribe has on its own website.

Normally, most VPS will explicitly state that they do not carry out logging activities, but Windscribe is quite specific in its wording about logging on their site. What they state is that “We do not store any logs that can identify you,” which can mean they keep other logs.

Digging a little further, we discover that Windscribe keeps timestamps of activities (at least for 30 days), meaning that they will logically associate with your account in order to make any sense. This makes their no logs policy stand on ground that is a little shaky.

This may be of concern to some users who might prioritize their privacy and anonymity when using a VPN service.

It's become the norm for VPN services to include some extras in to their primary service. These are usually value-added services which might be nice to have sometimes. Personally, we feel that what they offer is mostly being incorporated into most good browsers already, so the extras are just bling. However, Windscribe does have a few options which are a little different from the norm;

By allowing you to manually enter an UP address, Windscribe can potentially help you avoid networks which monitor connections for VPN users. These networks tend to block or interfere with VPN connections.

This includes in locations such as China or even some business networks. To use this feature you'll have to contact Windscribe to get an IP address from them. There is no indication if this is a paid or free add-on feature.

In the Windscribe app you can choose to use one of a few DNS servers while connected. These include OpenDNS (the default) or even the popular Cloudflare or Google DNS servers.

Claimed by Windscribe as one of their most unique features, R.O.B.E.R.T blocks malware as well as ad and tracking domains. Important to note is that this is done at the DNS level on Windscribe servers.

DNS-level blocking carried out by R.O.B.E.R.T allows the feature to work cross-platform, meaning that you can enjoy the benefit irrespective of what device you choose to run Windscribe on.

Important to note is that the feature has also been steadily built on by Windscribe and they have continued to add on new features to R.O.B.E.R.T over time. New inclusions of note are additional filters as well as allowing users to create custom access rules.

This review of Windscribe covers their free service, which has limits on what servers we could access. However, they do not throttle speeds on free accounts which means that the relative speed results should be fairly accurate.

As always our speed tests start with a benchmark which tests the current efficiency of our theoretical 500 Mbps line. This is to put the speeds achieved while on the VPN in perspective. Remember that Internet speeds vary and results may differ slightly from test to test.

All the speed tests for Windscribe were carried out using the IKEv2 protocol.

For a free service we were surprised to get such decent speeds on the Windscribe US server. Seattle is a good location of HideMyTraffic to test from as it is a point on the US mainland that is closest to us.

The distance still makes for a long ping time (latency) but 82 Mbps is still very respectable. Some free VPNs we have tried (and honestly, even some premium paid ones) have hit lower speeds than this.

Windscribe's Europe server raised further eyebrows here as the speeds were just as good as many others. To be honest, we were expecting something in the range of the 50 to 60 Mbps region and to hit over 100 Mbps was great.

Unfortunately, upstream speeds were appalling and you'll hardly be able to send anything at these rates. Some VPNs do focus on downstream since that's what p[people mainly use, but in our opinion this is a mistake since a daily-use VPN should be seamless in both directions.

Our favoured Asia location to test VPN connections from is Singapore since it is centrally located (for global Internet traffic) and has excellent infrastructure. However, there are limited Asia servers for the free Windscribe service.

Speeds on their Hong Kong server were still good however and we did note that the upstream speeds were significantly higher than on the US and Europe servers.

Windscribe has an unspecified number of servers covering 63 countries around the globe. This gives it one of the most wide-spread networks around, surpassing many top-tier VPN services including NordVPN and ExpressVPN.

However, the unknown number of servers is a slight point of concern as it does raise a potential issue of server overcrowding. However, again, since the number is unknown, this is only a possibility (albeit a low one given their decent speed performance).

Free account users get access to 10 locations but it isn't all that bad. The first bright spot is that the free server locations are fast, meaning that if you do decide to upgrade, you'll already have a good idea of what speeds to expect.

No Netflix and Streaming on Free Versions

The free account on Windscribe doesn't give you access to streaming sites. We did try out luck and it definitely did not work – for Netflix or any other geo-blocked streaming sites.

To watch geo-locked content on Windscribe you will need to go with their PRO plan which has servers you can use for video streaming.

Customer Support: Free Does Have Its Limits

Support for customers of Windscribe is provided in a sort of modular fashion. You can try to chat with a live agent online, but that usually results in interacting with a chatbot named Gerry. If Gerry isn't able to solve your problem, you have an option to try and contact a live agent.

However, that usually won't work and a support email will be automatically sent to their team. Here comes about a small technical problem since responses are a little slow. It took Windscribe slightly over 48 hours to respond to a support mail with suggestions that weren't entirely helpful. Don't count on much support from Windscribe.

Yes, you really can get the use of a decent, free VPN with Windscribe. Signing up for an account is easy and instantaneous. However, the free service does come with two significant limitations. First, you can't access all their servers, only those at 10 locations.

The second and more considerable drawback is that you have limited bandwidth on free accounts. All free Windscribe accounts get 10GB of bandwidth per month. You can increase your bandwidth through some activities that Windscribe has, but you're generally seriously crippled.

Important note: Although there are limitations in bandwidth for free Windscribe accounts, do note that almost all free VPN services are restricted in some ways – not just Windscribe. Infrastructure costs money and no provider can afford to give you excellent service for free.

If you use the free account and want more, you can sign up for one of their paid plans. Paying monthly is expensive – $9 per month – so you'll want to sign on for their annual plan, which reduces your monthly commitment to $5.75 per month.

Interestingly, they have a ‘build a plan' feature whereby you can choose what locations you want to access, which will only cost you $1 per location.

For those who haven't used a VPN service before, Windscribe offers the potential to see if you can live with one. Not everyone can get used to the quirks of an always-on VPN service, and rather than paying for a service and then testing it, Windscribe turns the tables around.

They offer relatively good speeds even on their free service, and you can sign on with their paid plans if you're happy with them. However, do be warned that Windscribe's paid plan isn't the cheapest around and some excellent VPN service providers charge much less!

To get an idea of how much top-tier VPN services charge, check out our Best VPN Deals.

Be the first to leave a review.

Your browser does not support images upload. Please choose a modern one

Visit Site
Is There a Windscribe Chrome Extension?

Windscribe is available on multiple platforms, and one way of using it is via the Windscribe Chrome extension. You can also find Windscribe extensions for the Firefox and Opera browsers.

From time to time, you'll come across some Windscribe promo codes you can use to upgrade your account. These can be claimed by logging into your account on the Windscribe website and looking for the “Claim Voucher” option.

Windscribe is one of the free VPNs that are safe to use. Like most commercial competitors, it offers a comprehensive range of security and privacy measures that impresses many. These include 256-bit encryption and perfect forward secrecy.

Windscribe offers a free plan that anyone can use. You don't need to make any payment to use their free plan. However, Windscribe's free plan limits what servers you can access as well as the bandwidth available.

Windscribe VPN has its headquarters in Canada. Additionally, it works with a diverse overseas team spread across multiple countries on three continents. Their servers are available in 60 different countries.