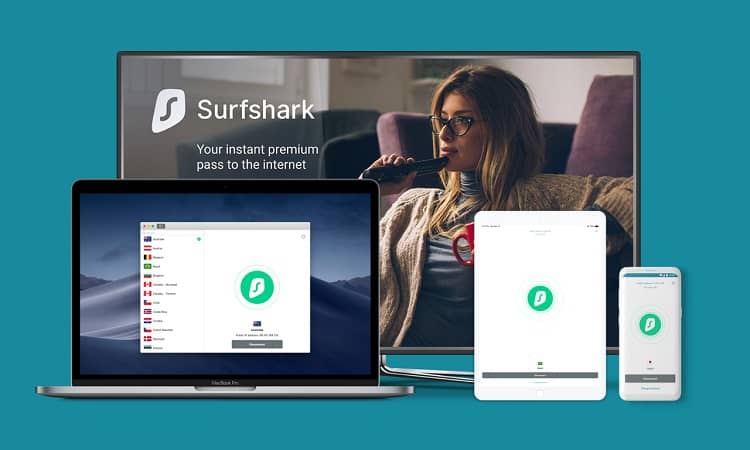 Surfshark emerged some time in 2018 and has been on an upward trajectory since then. The service is run out of the British Virgin Islands (BVI). Offering a fast, secure and feature-packed service it is certainly one to be keeping an eye on.

The features it has to offer are hidden underneath the smooth veneer of a very simple and easy-to-use interface. From a consumer point of view, it also ticks a lot of the right boxes in meeting demand, from everything to Netflix access all the way to bypassing the Great Firewall of China.

Today we put it to the test and see how it stands up to the competition;

Based in the British Virgin Islands

Surfshark is the second BVI-based VPN company we’ve come across, the first being the well-known ExpressVPN. This is excellent since the location is a haven for companies which don’t want to keep user data.

BVI doesn’t require companies that operate there to retain such data and as such, Surfshark users can be confident that the company isn’t likely to retain theirs. This mirrors the Surfshark no-logs policy. Remember, always doubt VPN companies which are based in countries that have laws enforcing data retention.

While there are some VPN providers who seem to delight in offering many different types of protocols, I sometimes find it a little odd. Quite a few protocols are not in demand due to some weaknesses or other and ultimately, only a few are regularly chosen.

Of those, Surfshark has wisely decided to only implement a strategic few. These are well-chosen, the two key ones being OpenVPN and IKEv2/IPSec. OpenVPN is popular due to it being open source and readily cross-platform compatible, while IKEv2 is fast, but more usually used on mobile networks.

The third choice of protocol seems to be targeted specifically at mainland China users and is known as Showdowsocks. Unfortunately, we couldn’t test is this could allow China users to circumvent the Great Firewall, but the Shadowsocks protocol is known for allowing that.

When using the Surfshark application, do take note that the default protocol is IKEv2. You’ll have to change it if you want something else.

There are a fair set of VPN users who get concerned about their IPs leaking and such. That’s why DNS and WebRTC leak tests are usually part of our standard repertoire. I’m happy to report that Surfshark passes these tests with flying colours and there are no leaks in the boat.

Works on Many Devices

It is normal for good VPN service providers to have multiple apps and configurations for most devices and yes, Surfshark has this too. In fact, although I normally only use it on my desktop, laptop, or mobile devices I recently decided to install it on my LG smart TV.

The reason I wanted to do so was so that I could watch my Netflix US content there as well. Technically, you can install the VPN on your router – but that would slow down your connection. So, I only needed it to work on my TV.

Surfshark has something that it calls SmartDNS which helps you bypass geo-locks without needing to do a full VPN service. All I needed to do was to enable it on my Surfshark account, copy an IP address and set that up on my TV's WiFi. I was streaming Netflix smoothly in no time at all.

You can also use Surfshark with other non-mainstream devices such as PlayStation, FireTV, and more.

When I first heard of this VPN service provider and read some initial comments about speed I was, to begin with, quite skeptical. Signing up for and running it turned me into a true believer and I do believe I will stay on as a customer.

For those who’ve read my VPN reviews, you may know that I often get disappointed with many VPN services simply because I have a relative high-speed line. This usually gets slowed down by a lot via VPN services.

The theoretical maximum of my line is 500Mbps, but the actual speed usually hovers around between 350 Mbps to 400Mbps;

Taking that into account, I ran speed tests on Surfshark while connected to various servers around the world.

North America is literally on the other side of the world from where I am. Because of that, it is usually one of the locations where I encounter the highest ping rate as well as slowest speeds. Of course, there are some closer places that perform worse due to other reasons, but the US stress test is usually a good indicator of quality of service for me.

As you can see from the results, speed test while connected to a US-based Surfshark VPN server were astounding.

Surfshark speeds from Europe were just as good as their US-based servers. I tested from a variety of EU locations and many performed similarly.

The closest location to me physically is Singapore and the connection here was simply mind boggling. The excellent speed combined with a very low latency means that I can actually stay on Surfshark’s Singapore server and not feel much of a difference at all.

The land down under was also in decent shape and I would happily use this as well. Interestingly, although latency was lower than the US and EU servers, so too were the speeds of my connection here.

Perhaps the only black spot on their record is in Africa. Unfortunately, many of my VPNs face similar issues and I’ve yet to find one which performs to an acceptable level in this region. The speeds offer barely enough to surf the net and was a painful experience.

For the more paranoid among us, Surfshark also supports multihops, meaning they route your connection through two different VPN servers. Normall this would result in further degradation of speed, but impressively, Surfshark managed to handle it very well.

There are a limited number of pre-configured multiphops available, so you can choose from only a set number. I tested the Netherlands-Singapore link and it was very fast.

Torrents Possible but Not Great

Torrenting is one of the key things I look out for in VPNs because I do a lot of it. Unfortunately, P2P isn’t exactly great with Surfshark even though they claim to offer “top notch P2P speeds”. Apparently, they have a handful of dedicated P2P servers in certain locations you can choose from.

The connections to these are ultimately routed through their Netherlands or Canada servers. That results in everyone who is torrenting having their traffic flow through only two countries, and the speed tells.

Attempting to download 10 highly seeded files, I was stuck at download averages of between 4 Mbps to 7 Mbps all the way. Without a VPN my speeds are usually in the 25 Mbps to 30 Mbps region.

While I was gushing over the download speed results, I nevertheless did notice that in some cases, upstream was quite slow. This seemed pretty unusual, but for my case it isn’t something I care overly much about.

If you do a lot of uploading though you might need to exercise caution about which Surfshark servers you connect to.

Most popular streaming services worked well on Surfshark but of course, the most focus goes to Netflix. We ran an extended burn-in test on Netflix and ran it overnight for a few days. Over the course of that period there was only one instance of a disconnect.

The usage experience was very smooth even considering that we were connecting to a US-based server for Surfshark. All movies on Netflix US managed to play fine with minimal lag for buffering. There were no instances of Netflix detecting proxy / VPN usage and kicking us off.

Recently, Surfshark has been expanding its Netflix support and it now supports 16 different libraries including the US region. The latest addition to their repertoire has been support for the Norwegian content on Netflix.

As with any service, customer support was on trial. Given their newness, I decided to lob the support staff and easy ball but was surprised at both how fast the chat request was answered, as well as the outcome. My query to the support staff was about their VPN protocols, asking how come IKEv2 selected on my app.

The response from Surfshark was that the app auto selected the protocol based on my network, choosing the best for me. That was something new, since their documentation states that IKEv2 is the default protocol for everyone.

I shudder to think what would happen if I asked something more complex.

Having run the gauntlet with many VPN services, I have to say that there are general trends you can observe in the business. Mainly, it’s all about long-term business and they offer steep discounts to discourage customers from choosing short term plans such as monthly or even yearly payments.

Surfshark is similar in that sense, but I feel that a two-year sign up isn’t unreasonable for this type of service. Paying only $1.99 per month isn’t a lot and is by far the cheapest VPN I have seen at this level of performance. Don't forget that you can also connect to Surfshark with an unlimited number of devices. This goes doubly so since the recent hike in prices that NordVPN has undergone.

Their monthly rate is on par with industry average, so the two-year deal is the way to go! You can pay via credit card, PayPal, Google Pay, Alipay or even using some forms of cryptocurrency including Bitcoin.

According to a sales query I made, plans renew at the same prices as you sign on with. However, if their sales support is anything like their technical support, I am not too sure that’s what is going to happen, so just in case, I turned off my auto renewal.

Yes, there were several hiccups along the way during my assessment of Surfshark. Poor P2P performance and under-skilled customer support among them. However, let’s recap the good parts and remember that these are the core of any high-quality VPN service.

Surfshark offers good connection protocols at high levels of encryption. It does this while having servers that are able to support very fast speeds in many locations around the world. There are also unique features that make it appeal to a wider audience, such as the Shadowsocks protocol and of course, multihop VPN connections.

We've been using SurfShark for more than half a year now and with the exception of a few hiccups now and then the experience is pretty seamless. Over this period, I've also seen them grow their network and improve services over time.

When using a VPN you want to find one that's good enough that you will forget it's presence – just like SurfShark. For them, if you combine all of that with the crazy price it’s going for (again, only $1.99 per month) that is an offer that is extremely hard to beat. I say go for it!

Surfshark Review
4.8 / 5 ...
Get Surfshark Now!
Pros
Cons
Summary
Surfshark may be the new kid on the block where VPNs are concerned but it is surely showing its teeth. This provider simply ticks all the right boxes when it comes to performance and does so without breaking the bank. Highly recommended.
Performance
Security
Features
Useability
Pricing

Scroll back to top