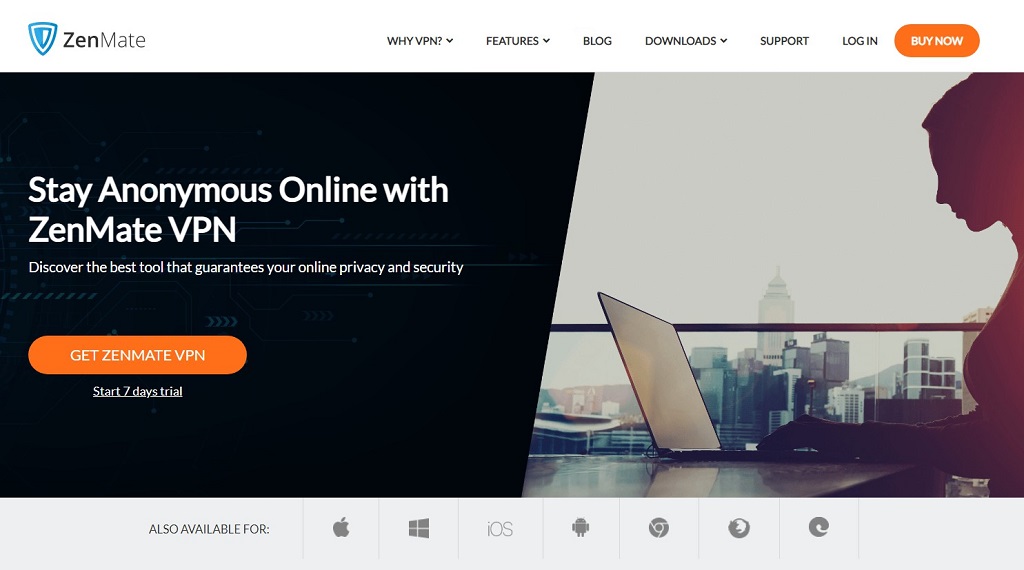 ZenMate is a German Virtual Private Network (VPN) service founded in 2013. Kape Technologies acquired the brand in 2018, adding it to their stable of VPN products. Today, ZenMate sits under the same umbrella as CyberGhost and Private Internet Access.

ZenMate uses various protocols, but which are available will depend on the platform you’re on. Their browser extensions offer AES 128-bit, while you get covered by 256-bit encryption on desktop or mobile devices.

That’s around standard for the VPN industry and secure enough for regular use. Core security is based on TLS 1.2 (RFC 5246) and supports various ciphers thanks to Perfect Forward Secrecy (PFS).

While ZenMate claims not to monitor or store any data, you should exercise caution with this Euro-based VPN. Jurisdiction is a sore spot for many users, and some who trust VPN “no logging” claims sometimes find themselves in the soup.

Media streaming seems to be one area heavily touted by ZenMate. It claims excellence in both geo-unblocking as well as live streaming support. Their list of geo-unblocked services is long and includes various Netflix regions (US, France, Germany, UK), HBO Now, BBC iPlayer, and more. They have a set of “Special Streaming Servers” for this purpose.

ZenMate does support P2P activities but only on their “Ultimate” plan. It’s built a slightly more complex range of plans than usual, but we’ll cover that later on.

ZenMate support comes in the way of an online submission form via their website. I guess you can consider this a form of email support. Aside from that, it has a comprehensive knowledge base for first-line self-help.

Topics covered in the knowledge base cover everything from the basics like how to get a ZenMate free trial to the difference between their VPN plans. More advanced topics like ZenMate protocols and OpenVPN installation are available as well.

However, the quality of the content leaves much to be desired. I’ve seen several topics where the content doesn’t even accurately address the issue at hand. Don’t count on this being of much assistance.

Price: How Much Does ZenMate VPN Cost?

ZenMate comes in several versions. There’s a minimal free VPN service at the lower end of the scale, mostly meant for web browsers. You can use it on Chrome, Firefox, and Edge, but only servers in four countries are available. SPeeds are also capped at 2 MB/s – hardly usable.

ZenMate Pro is also for web browsers, but it provides the full capabilities of the service. That means over 4,200 servers in 80+ countries and unlimited speed. An annual subscription of ZenMate Pro will set you back $1.99/mo.

ZenMate Ultimate is more costly on an annual subscription at $4.49/mo. The only advantage it gives over ZenMate Pro is that it’s available as an application, offering more protocols and P2P Capabilities. A 3-year subscription to ZenMate Ultimate has the price dropping to $1.64/mo.

ZenMate is a bit of an odd duck among VPN services. Its range of plans seems to indicate some confusion as to its target customer base. ZenMate free isn’t even worth considering since it’s so terrible.

Between ZenMate Pro and ZenMate Ultimate, I don’t see the point for Pro since you’re paying nearly the same price. An app-based VPN will always be better for privacy and security than a light browser version.

ZenMate VPN Review Summary
3.7 / 5 ...
Pros
Cons
Summary
ZenMate VPN isn't an ideal choice but if you're looking for something that's browser-based or cheap, it's worth taking a look. Be aware though, there are many better options in the budget space of VPNs.
Performance
Security
Features
Useability
Pricing